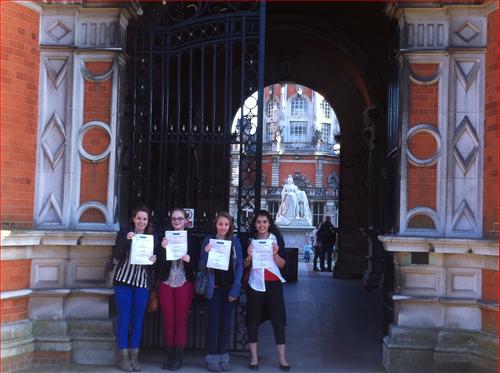 On Saturday 25th February, four Year Nine girls represented Tormead in the University Challenge competition at Royal Holloway. They proved to be an outstanding team, in a gruelling trial of intellect and knowledge.

In the first round, they were up against ACS Egham International School. Once they gained confidence, speed and figured out how the buzzer worked (a key skill in any University Challenge competition!) they soon rapidly advanced on their opponents and won by a storming lead of 150 to 115. This earned them a well-deserved place in the semi-finals, where they were faced with the formidable team of St. Mary’s School Ascot.

They did enormously well in this round also, answering some very challenging questions that would even have had Stephen Fry reaching for an encyclopaedia. They won quite convincingly by 170 to 95. This secured them their place in the final, against Bishop David Brown School. Unfortunately, this particular opposing team were especially quick on the buzzer and the girls, despite a hard fought battle, just couldn’t catch up with them. That said, our brave and valiant team of Quiz Mistresses did know the vast majority of the answers, just could not mobilise their fingers fast enough to seize the victory.

A great day was had by all; the girls displayed great intelligence, tenacity, maturity and courage and really pulled together as a team. They were magnanimous in their triumphs, but more importantly, gracious when not claiming victory. At the end of it all the girls proved they could operate a buzzer (eventually!), answer exceedingly tough questions on a breadth of subjects and most of all showed true school spirit by not once giving up and fighting to the end. Well done to all those that took part.