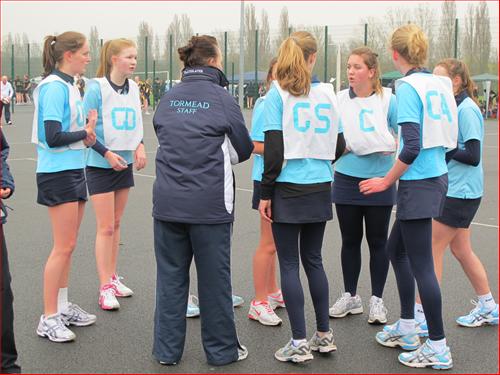 Tormead’s U14 Netball Team qualified for the National Schools Final for the first time this year.

They competed at both county and regional level to qualify for the national event, as one of only 2 teams in the South East region and the only team from Surrey who journeyed to Essex to play with the cream of England’s schools netballers.

Despite the early start, the rather inclement weather and the fact that none of the girls had ever been at a National Netball Final – they all knew it was vital to get off to a good start.  Unfortunately, before they knew it, they were 5-0 down in their first match against The Grammar School at Leeds.  However, some settling words at half time saw them fight back to win the match by 11goals to 10.  Tormead had won their first match at National Level!

The next match saw another win against Nottingham Girls HIgh School 8-2 then a hard fought match against Brighton College saw Tormead losing 7-8.

Next up were Saddleworth School (Oldham) which proved to be a defining match for the girls.  It was a level of physical netball the girls had never seen or played before and it didn’t end well as Tormead lost the match 5-15.  It was time to dig deep and show what they were made of and dig deep they did.  They won their next 4 matches to come an overall 3rd in their pool of 9, which meant they finished 5th overall.

The Tormead U14 Netball team are now ranked 5th in the country and we should all congratulate S. Small, I. Russell, E. Hill-Smith, K. Hall, E.Owens, E. Ascione, T. Rossi, J. McArthur and S. Brewer for giving up their spare time to practice, for all their hard work and dedication before the event, and in true Tormead character showing the determination not to give up on the day.