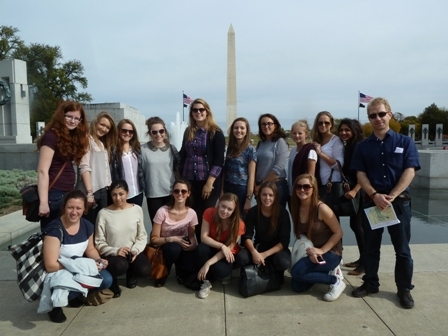 During the October half term the Sixth Form Government and Politics A Level group visited Washington DC.

Along with the Vietnam and Korean war memorials they toured Congress in the Capitol Building on Capitol Hill; the Supreme Court; the Pentagon and the National Archives which contain the originals of the Declaration of Independence, the Constitution and the Bill of Rights.

With the visit being planned to coincide with the 2012 Presidential elections the girls also went to the Neuseum  – an amazing museum connected with newsgathering and current affairs, where they watched a presentation describing how campaigning has changed in Presidential elections with the use of television starting in the 1950’s and taking us through to the current campaign.

Oh not forgetting a trip to the Mall for some retail therapy, Georgetown for a movie and finally a trip to Ford’s Theater where President Lincoln was assassinated in 1865.

Then with Hurricane Sandy moving ever closer they managed to get the last flight out of DC before the airports were closed for the Hurricane – perfect timing Mr Sykes!