Our gymnastic squads have had an outstanding start to the year, last term we hosted the U11 and U16 Regional Milano Finals. The competition saw schools from across the South East compete in both the Regional and National categories.

Our National Under 11 and Under 16 teams qualified for the British Championships to be held at Stoke in March.

This year we also entered our Senior Regional Squad into the Regional category and they performed very well to achieve 2nd and 3rd place overall.

A fantastic performance across the board from all our girls.

At the Regional Gymnastics Finals held in February two teams competed in the U11 category, three teams in the U14 category and one team in the Senior category.

The first U11 team competed so well and narrowly missed out on winning the regional title by 0.15 of a mark. This could be a tiny step on a vault landing or a bent leg in a floor routine. The girls were upset not to go on to represent the South East in the British Championships but since November they have narrowed the margin between themselves and their nearest rivals by 3 whole marks – which is an incredible achievement.

Some of our younger gymnasts also competed in the second tier U11 competition and they came an amazing second place despite some girls being two years younger than the rest of the competitors.

The Senior team won the National tier of the Regional event and will go onto represent the South East at the British Floor and Vault  Championships in May.

In the U14 category we entered two teams into the National tier, the ‘A’ team missed retaining their title by 0.1 of a mark, the teams came 2nd and 4th respectively.

We also entered the Regional Tier at U14 and the girls came first. This team consisted of a mix of girls from the Junior and Senior School, a credit to the depth of talent here at Tormead. 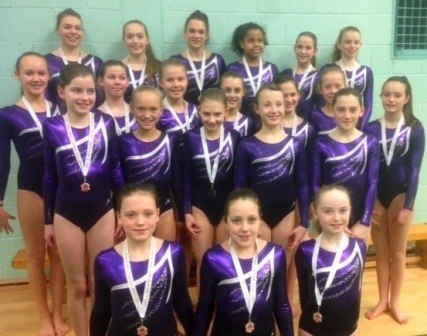