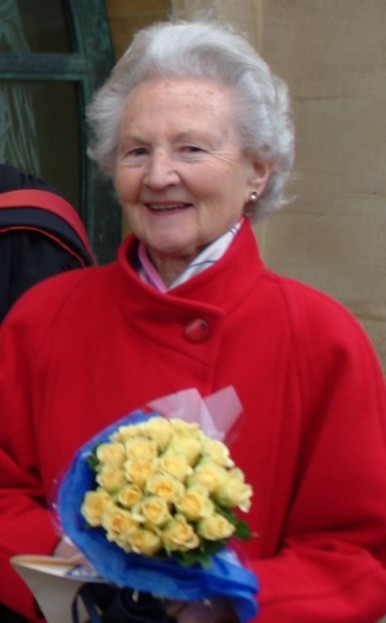 It is with great sadness that we announce the death of Miss Marian Shackleton who was the Headmistress of Tormead from 1959 – 1977.

She is remembered by many staff and girls – generations indeed – not only those who were at Tormead during her leadership, but scores of younger Old Girls too who came to know her through her links with TOGA. She devoted her life to the School and remained a keen supporter of us throughout. A fine modern linguist, she had superb organisational skills and an enviable reputation of being strict but fair; she was often forthright, but very kind in her dealings with individual pupils, parents and staff. She had real presence, was always dressed immaculately, setting herself and maintaining – the very highest standards in every way which she also demanded of the girls: in work, behaviour and appearance.  Determined and dynamic, she had a meticulous eye for detail. She could appear formidable, even severe to many.  She was undoubtedly of her generation; but she also had a delightful sense of humour and was very generous with her thanks and encouragement.

During her eighteen year tenure at Tormead,  Miss Shackleton –  ‘Shack’ as she was called by many of her girls and staff, a name of which she was very aware! – developed the School significantly, initiating a number of changes to the fabric and organisation, many of which are still recognisable today.

She oversaw the first major building work programme, resulting in the construction of the first dining room (demolished in 2014), the School Hall and the Garden Room.  In addition, Home Economics and an Art Block were added, and a ‘state of the art’ language laboratory. But she was not sentimental nor against progress and was delighted to be kept up to date with our current development; all publications regarding it were sent to her!

Miss Shackleton believed passionately in the importance of travel as part of a broad education. She thought that independent schools needed a programme of educational cruises to historic locations and set up a programme with a subsidiary of P&O. This initial venture became the Independent Schools Travel Association and her link with this continued until late November: the final meeting of the Trustees of ISTA met with her for lunch just 3 days before she became ill.

In 1975 David Stevens, the first Director of Music was appointed.  He described her as ‘strong in character, commitment and vision, with seemingly endless resources of energy; she organised her staff and pupils with dynamism, determination and remarkable patience.’

Miss Shackleton retired eventually to Norfolk, where she continued to lead a full and busy life, near her family, playing an active part in her local community. But Tormead remained close to her heart: contact with girls and staff from TOGA and good wishes sent to School at the start of each year, letters thanking us for the School Magazine – a publication that meant so much to her – and occasional telephone calls, and most recently messages via her iPad.

We shall miss that contact that gave us a link to Miss Williams and Miss Cole, but we are grateful for all that she did for our school. We owe her much. She achieved what all who enter the teaching profession set out to do: she made a real difference.

Visit our new Virtual Open Day page, including 360 virtual tours, maps with point-of-interest pop-ups and a host of videos from all our supporters!