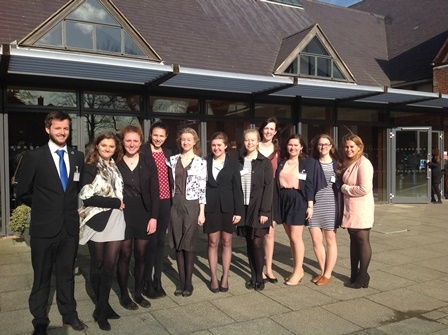 MUN is an opportunity for students to experience a simulated United Nations. Through research, discussion, negotiation and debate the students are responsible for seeking a resolution to international problems and creating an atmosphere of true international cooperation.

Ten Tormead ‘diplomats’ from Year 11 to Upper Sixth formed three teams, representing Canada, Israel and Kenya. Over the course of the two days the girls were immersed in the culture of international diplomacy, focused on passing resolutions addressing some of today’s key issues. Aided by inspirational speeches from Emma Cole, a HIV positive activist, and Dr Nick Banatvala, Senior Advisor at the World Health Organisation, students tackled topics such as the Ebola crisis, abortion provision, regulation in capital punishment, the environmental impact of fracking and freedom of expression.

The girls learnt to develop and manage alliances with other nation states, as well as the fine art of negotiation. Following their individual debates on health, human rights, ecology and environment, and economic and social issues, the girls put forward amendments and commented upon the viability of resolutions.

On the final day our Diplomats gathered in the general assembly with team members to address an urgent fictional emergency: a new waterborne strain of the HIV virus. The ensuing debate provided some of the most useful lessons. First, the girls experienced the strength of will required to get their voice heard in a dominating and heated atmosphere. Perseverance and stubbornness held out in the end as the girls persisted in forcing an overwhelmingly male general assembly to hear their points, with Ottilie skillfully voicing the concerns for Kenya. By the end of the 60 minute debate, time constraints meant that many voices were left unheard and the charisma of the Iraqi delegation managed to quash any resolution that set out to solve the issue.

Tormead’s Diplomats Ciara, Alicia, Charlotte, Yolanda, Sasha, Emily, Heidi, Mimi, Ottilie and Martha should be congratulated for their efforts, as each of them displayed tremendous courage to stand and deliver their opinions and argument to an assembly of over 40 countries and 20 schools.