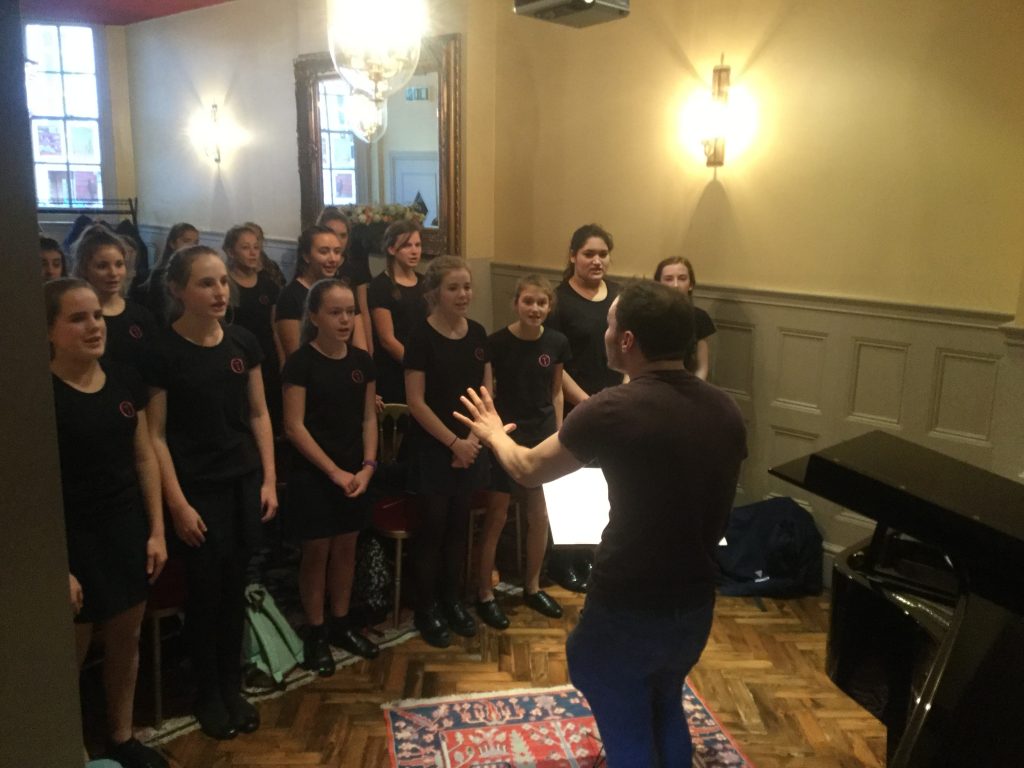 On 12th November 25 girls from Glee Club had the opportunity of a life time, to workshop their songs with Alex Parker, the current assistant Musical Director of Les Miserables in the West End.

The setting was the 1901 Arts Club in London which provided an atmosphere of elegance and sophistication to the 3 hour afternoon masterclass.

The girls began the afternoon with their rendition of ‘What is This Feeling’ from ‘Wicked’. Alex commented on their enthusiasm, passion and the fantastic sound produced. Alex then set to work on dynamics and giving it the ‘west end’ touch. The result was amazing, we could give the cast recording a run for their money!

Warmed up and buzzing it was the turn of a few members of the Glee to perform their solos and duets to Alex for his words of wisdom. Ciara, was first and sang ‘Pulled’ from ‘The Addams Family’. Much expert advise was given and many giggles followed especially as Alex’s top tip to Ciara at the start if the song was ‘not to act!’. After a moment of bemusement, the point explained, the girls watching realised the genius of the direction. As Ciara restarted her song, the whole room erupted into laughter as the comedy of the song was released and enjoyed by all!

Megan and Phoebe performed their duet version of ‘Quiet’ from ‘Matilda’ followed by Esme singing a specially adapted version of ‘Wouldn’t it be Loverly’ from ‘My Fair Lady’.

In the second half of the afternoon Alex presented the girls with a song ‘So Much Better’ from ‘Legally Blonde’. Having never seen it before the girls rose to the challenge with enthusiasm. Some might say that in the true spirit of Glee we got slightly carried away because 45 minutes later we had not only learnt the song but added three part harmonies!

As a special ‘thank you’ and in homage to Alex, all the girls had worked hard preparing ‘One Day More’ from ‘Les Miserables’. A little worried as to how our 7 part harmonies would fair in front of such a knowledgeable audience the girls were delighted when Alex offered to conduct! They sang their socks off!

Their work for the day was done, now all that was left was to watch Alex ‘at work’ at The Queens Theatre. I don’t think a conductor has every got such an rapturous welcome.

It was fabulous. The girls waiting for the moments Alex had mentioned earlier in the day, especially in ‘One Day More’. All spellbound by the show, Alex, and the cast, were given a Tormead standing ovation.

If the singing on the coach is anything to go by I think Glee Club had an inspiring and enjoyable taster of West End Musical Theatre life!