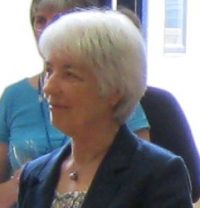 It is with huge sadness that we announce the death of Mrs Jean Gronset, formerly Jean Crouch-Smith, who has died after a short battle with leukaemia.

Headmistress of Tormead from 1977-1991, Mrs Crouch-Smith is remembered with much affection and respect by many, many old girls and never a day goes by when we do not refer to her: the Performing Arts building is named after her and we all go to the JCS most days. Like Marian Shackleton (Shack) before her, she was well aware of this label and though both were of generations where first names were not commonly used by staff never mind nicknames encouraged, she was very pleased to be recalled so fondly and accepted happily my introducing her to current girls, on her regular visits to school, in this way.

Tormead owes much, indeed most, to Jean Crouch-Smith for developing it into the school it is today: in number, in academic levels, in curriculum breadth, in developing facilities, in “looking to the future” as Girls in Blue has it, she shaped Tormead as we know it. She was not afraid of change, for example stopping boarding when the time was right, but it was never change for change’s sake and the highest of standards in all things mattered: “Never pass anything which is unacceptable, whether it is poor work, poor manners, slack behaviour, untidy or incorrect uniform, biro or ink.” Her letters of thanks after school events or her Christmas cards in retirement were impeccably handwritten, but she was adept too at texting and emailing via her iPad; and of course she led from the front on the school’s first mufti day!

Many recall her calmness, her authority – and both were much in need when the sports hall she had built and which was opened in 1987 by Virginia Wade was burnt down in March 1989. Her response on seeing the devastation: “We shall have to  rebuild”. This she did – and asked Virginia Wade to return to open it!

A modern linguist, Jean Crouch-Smith left Tormead in 1991 to work in China with teachers of English, but when she and her husband left China , she returned for much of each year to Guildford and Tormead remained close to her. She provided me with much of my knowledge and understanding and love of the school and its history. She could place every room, existing  and demolished, recall countless staff and girls, parents too, and retained that genuine interest in the successes and enjoyments of current girls, as all natural teachers do. I was privileged to get to know JCS; many more were privileged to have her as their Headmistress. We shall miss her, but remain grateful for the huge and long-lasting impact she had on Tormead; and we shall continue to recall her most fondly every day.

Visit our new Virtual Open Day page, including 360 virtual tours, maps with point-of-interest pop-ups and a host of videos from all our supporters!