Eighteen girls represented Tormead at the British Floor and Vault National finals held over the bank holiday weekend in Stoke. In order to compete at the British finals, earlier in the year these girls won their respective age groups at the South East Regional qualifiers.

The National Finals began on Saturday with our youngest age group, the Under 11 team (Sonia, Isla, Alexa, Daniela, Eliza, Amelia) many of whom had just returned from their week-long residential trip.The girls rose to the challenge, handling their nerves well to perform beautiful floors and strong vaults. A fantastic team performance resulted in the girls becoming British Champions with a clear three mark lead. Sonia was also crowned the highest scoring Under 11 gymnast of the day, with Daniela picking up the bronze. It was a great start to the weekend’s competition.

On Sunday, it was the turn of our Under 14 (Charlotte, Emilie, Carrie, Emily, Liberty, Leonie) and Under 19 (Emily, Hattie, Sierra, Maddie, Eleanor, Lily) teams. Despite an early start for the Under 14 team, they showed maturity beyond their years, performing with poise and elegance on the floor combined with powerful tumbling and vaulting. In a very strong field of competitors our Under 14 gymnasts held their own and were rewarded by taking the British National gold medal. Individual success was also awarded to Emily who was the highest scoring Under 14 gymnast.

Finally, our Under 19 team – who had witnessed their younger teammates winning the British Titles – were determined and focused from the start. The competition was fierce with some outstanding gymnastics on display, not only from our gymnasts but across the Under 19 category. Spurred on by their teammates’ results, the Under 19s had a fantastic competition, winning the overall British Title. Emily also placed 3rd highest Under 19 gymnast of the day with an impressive 15.9 out of 16 on vault.

Congratulations to all girls, coaches and parents involved! It was a fitting end to the British championships and a wonderful result for Tormead gymnasts, especially in Emily and Lily’s last ever competition for the school. 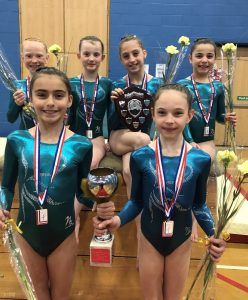 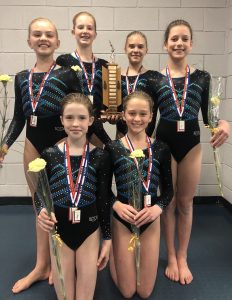 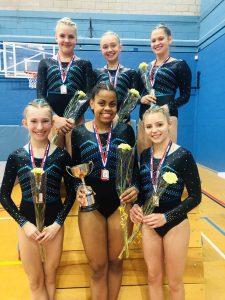