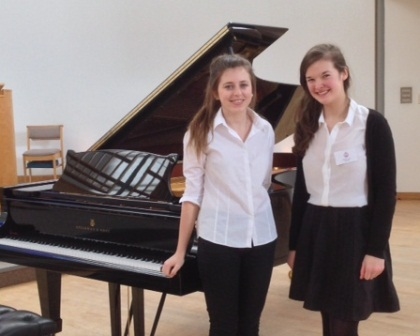 Tormead pianists participated in the 2nd Pangbourne Piano Festival over the weekend of 1st and 2nd March, at Pangbourne College, Berkshire. This was the first time Tormead had joined the festival, which attracts an incredibly high standard of young musicians of various ages, from a wide range of solo and duet classes.

Tormead Junior pupils Christina and Grace (Years 4 and 3) were the youngest entrants in the festival, and played beautifully in the Under 10 Intermediate Class for Grades 4-6. They presented themselves extremely well, with Christina being awarded ‘highly commended’ and Grace achieving ‘outstanding’.

Year 11 pupils Isabel and Eleanor won as duet partners in the Under 18 Senior Class, playing Mozart’s Sonata in D Major 1st Movement: an incredible achievement and a first for Tormead.

Pangbourne Piano Festival takes the form of a Masterclass with the adjudicator working with each candidate on aspects of the piece immediately after they have played, which is a particularly helpful way of inspiring aspiring young pianists. The fabulous venue included three recital halls, each with a Steinway grand piano, and a chapel.

This was a very positive experience, and congratulations to all our girls on their fantastic achievements.